We’ve all heard the expression “a mangy dog.” We also know the phrase carries negative connotations. However, we may not know all that much about mange, the condition where the expression is derived. Being familiar with both is vital, as it could save you and your pooch some grief.

Mange at a Glance

Mange, which can also be known as demodicosis or canine scabies, is a highly contagious skin disease caused by mites. These mites inhabit a dog’s hair follicles and skin at the puppy stage, and they are typically transferred to a pup’s skin by his mother. These mites are usually inconsequential unless they proliferate to large numbers.

An overwhelming amount of mites will manifest itself on a dog in two ways. The first manifestation is localized within a specific area of the dog, such as the face, legs, or trunk. The second type of presence is more generalized, meaning that it can cover the dog’s entire body.

Here’s a picture of what it can look like (quick warning: pictures of dogs with mange may be difficult for sensitive readers).​ 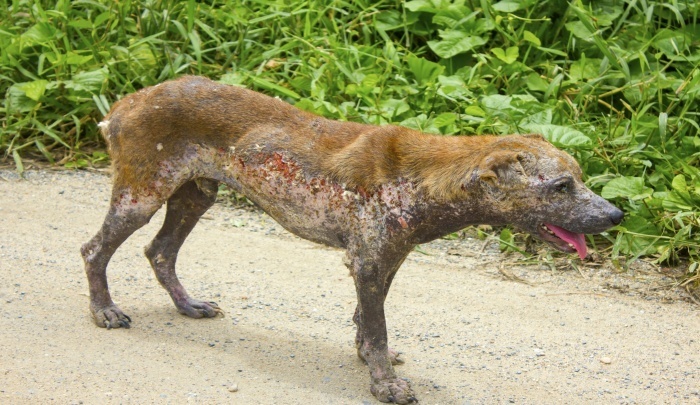 What are the Symptoms of Mange?

The primary symptom of mange is lesions that develop on the dog’s body. These lesions are usually accompanied by red, crusty patches of skin that give the affected area a stone-like appearance. The skin can also develop a greasy, moist look in certain instances.

The lesions also cause hair loss (alopecia) around the affected areas. This condition typically starts on or around a dog’s eyes, muzzle, and head, and eventually spread to other affected areas. While hair loss is typically associated with other canine conditions that are driven by excessive scratching, the lesions that cause the hair to fall out are not necessarily itchy.

My Puppy is Showing Signs of Mange: Should I be Concerned? 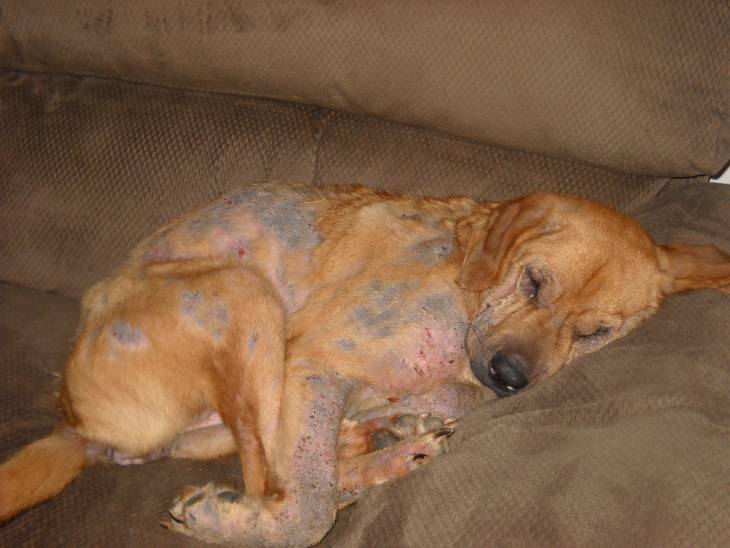 Mange is a relatively common occurrence in puppies. The main reason for this is because their immune system has not fully matured to a point where the effects of the mites can be warded off. In most cases, the signs associated with mange will subside once the pooch’s immune system fully develops.

Mange is a real issue once a dog reaches twelve to eighteen months old. After this time frame, it is clear that the dog’s immune system cannot properly quell the effects of the mites that live on his flesh and hair. While it’s a good idea to give dogs of any age a treatment to stave off the effects of mange, it is particularly crucial that you treat older canines, since they will need a hand.

What are the Treatments for Mange?

While it may appear easy enough to determine the kind of mange your dog may have by looking at his fur, it’s still a smart idea to have his condition diagnosed by a veterinarian. The vet will commonly take a skin biopsy to determine the intensity of the mites causing the condition. He or she will then use this information to build a complete treatment plan that will be most suitable for your buddy.

What Will My Dog Look Like After a Mange Treatment Regiment?

The remarkable thing about a proper mange treatment is that it can restore even the most haggard looking of dogs back to normal. Granted, combating the condition may be an ongoing battle for you and your pooch. However, the results of a proper treatment make the battle worth fighting time and again.

If you’re a dog owner, it almost goes without saying that you need to take the development of mange on your dog very seriously. After all, a mangy dog is not a healthy dog. You should always strive to make sure your pooch is in the best health possible from muzzle to tail.

What’s more, a dog that’s free of mange will be in a happier space. This improved sense of joy can translate to an even stronger relationship between you and your buddy. And really, what more can you want?