A wet nose is one of a dog’s most recognizable features. While it’s not a huge concern if you catch your pooch with a dry honker every so often, it could become problematic if it’s a chronic condition. Fortunately, you can go nose-to-nose with the problem if it’s persistent.

The Times When a Dry Dog Nose is Normal

Contrary to what you may initially think as a novice dog owner, a dry dog nose does not automatically equate to something being wrong. In fact, a dog’s nose can fluctuate from wet to dry several times throughout the course of the day. Most of the time, there is a perfectly rational reason as to why your little buddy’s snout is arid.

For instance, if your pooch has been hanging out in or near a place of warmth, like your home’s radiator or in the sun as it streams in your backyard, his nose won’t be wet. He also may be spending a huge chunk of time in a room that contains subpar air circulation. Your dog could also be a bit dehydrated – a condition that could be remedied by doing something as simple as filling his water bowl.

When Should You be Concerned About Your Dog’s Dry Nose? 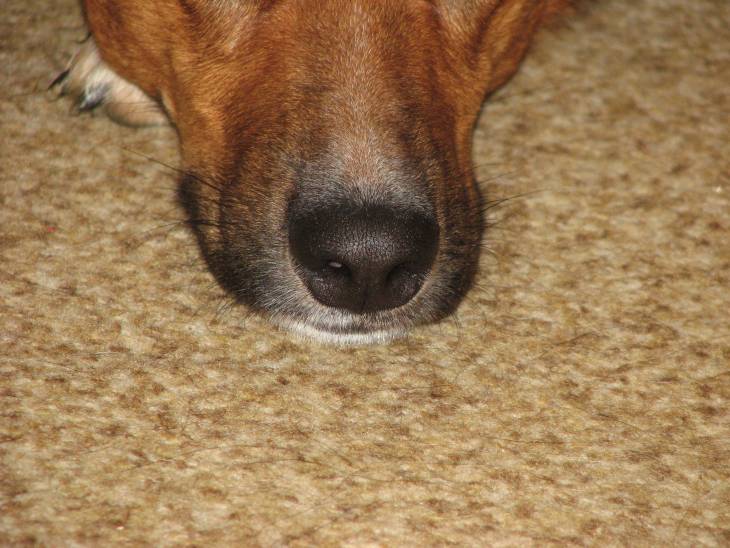 You should really be concerned when the lack of moisture is accompanied by other visual clues. Indicators such as cracked, scabby skin or bumpy masses could be cause for alarm and a trip to the vet. If your dog has a serious nasal issue, you may see him scratching at it excessively or even rubbing it along a carpeted surface.

You’ll also want to keep a close eye out for what is coming out of your pooch’s nose. An obvious indicator that something foul is afoot is if you notice blood coming from his nose, either from the surface or from within the nostril. Any discoloration of nasal discharge (basically, anything other than clear) is also an indicator of something bad happening.

There is a wide range of issues that could be in play if your pooch has any of these issues going on. Some of these issues aren’t a big deal in the grand scheme of things – a red, flaky nose, for example, could merely be the indicator of sunburn. On the other hand, certain nasal issues could be indicative of something far worse, like pneumonia or a clotting abnormality brought about by the ingestion of rat poisoning.

How Should I Treat a Dry Nose?

Proper dry nose treatment depends on what condition is affecting your dog. For instance, if it’s a mild condition like sunburn, there are several topical creams out on the market that can help soothe things over. And if your dog does like to lie out in the sun, you may want to consider turning to the virtues of coconut oil to give him a little extra protection.

When it’s Time to Visit a Vet

It’s generally a good idea to seek treatment from a veterinarian if the symptoms demonstrated by your pooch extend beyond the realm of flaky nasal skin. Once there, how the nose is treated depends on what the vet discovers through diagnosis. This part of the equation could be a bit complex and could involve tactics such as blood work, and endoscopy, a CAT scan, e-rays, or clotting tests.

For minor issues that directly relate to the nose, such as an allergy, the vet may prescribe some medication or a topical ointment to help your pooch out. If it is something largely symptomatic of a larger issue, your vet will devise a treatment plan that focuses on the root of the nasal issue. In this case, you’ll want to be sure to carefully discuss the course of treatment with your vet so you can stay as informed as possible.

Keep an Eye on that Nose!

Just because you spot your pooch with a dry nose, it doesn’t mean that he’s under the weather. More than likely, there is a perfectly logical explanation behind its dryness. However, it if the dry condition is accompanied by something that is more visually alarming, it is in your best interest to treat it seriously as quickly as you can.