We know that vaccinations are a critical part of dog ownership. What we may not know, however, is the details behind the alphabetic jumble that is the dhpp vaccine. Admittedly, the letters make a lousy acronym when strung together. But each represents a key part of canine preventative health.

What Does Dhpp Stand For?

Dhpp is not so much an acronym as it is a collection of characteristics that goes into your dog’s canine distemper shot. Sometimes, this shot isn’t even referred to as Dhpp. If you see the abbreviations DA2PP, DA2PPV, or DHPPV written on your dog’s health record, you’ll want to note that those shorthand codes are alternate names for the Dhpp vaccine.

No matter what you call it, the Dhpp vaccines consist of various components, each of which is designed to protect your pooch from contracting severe illnesses. The diseases that the collective injectable fight includes canine distemper, hepatitis, parvovirus, and parainfluenza. In some cases, the vaccines are designed to combat other diseases, such as leptospirosis and coronavirus.

What Exactly is Canine Distemper?

Canine distemper may sound like a shot to keep your dog from developing anger issues, but it’s much more serious than that. In fact, it is a potentially deadly viral illness that wrecks havoc on a dog’s respiratory, nervous, urogenital, and gastrointestinal systems. As of now, there is no cure for this condition.

The virus that causes distemper can be spread via direct contact, indirect contact, or through the air. At first, the virus will cause fever, runny nose, red eyes, and a sense of lethargy in your pooch. As the disease progresses, key parts of your dog’s body such as the nervous system and the brain will start to malfunction.

Canine distemper also tends to do its damage rather quickly. If your dog has a weaker immune system, he could die from the disease roughly two to five weeks after he initially contracts the virus. Needless to say, you should rush your dog to the veterinarian as soon as you possibly can if you suspect him to have this horrid disease.

How Often Should My Dog Get the Dhpp Vaccine? 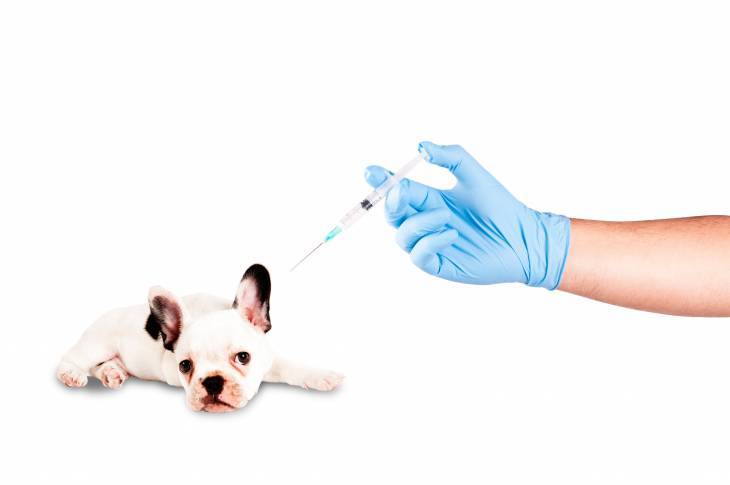 It is recommended that your dog’s first dhpp vaccine should be administered to him between six and nine weeks when the immunity that he naturally gets from his mother’s milk starts breaking down. Once this has been administered, it is recommended that you follow up with another vaccination roughly six weeks after the first vaccination. From there, your little guy won’t need another vaccination until he’s one year old.

It should be noted that vaccinations don’t stop once your dog reaches adulthood. However, the recommendations relating to adult dog vaccinations have been modified. It used to be recommended that your dog gets vaccinated on an annual basis; this interval has been expanded anywhere from three to five years.

The reason for this shift is due to concerns about over-vaccinating your dog. Specifically, there is some worry that side effects that could potentially be detrimental to your pooch could develop if he receives too many dhpp vaccinations. You should consult with your veterinarian to determine what type of vaccination interval is right for your dog.

There is No Debate About Dhpp’s Importance

While the actual time interval between shots could make for some spirited discussion, the importance of your dog receiving dhpp vaccinations throughout his life is something that simply cannot be argued. Canine distemper is a devastating disease, and not just because it puts dogs through a lot of pain. The symptoms that a dog will exhibit while in the throes of the condition can be way too much for an owner to bear.

Because of this, if you fancy yourself to be a responsible dog owner, you should consult with a vet to hatch a vaccination strategy that will maximize your dog’s overall protection over the duration of his lifetime. Without having a solid dhpp vaccination plan in place, you run the risk of putting your pooch in harm’s way – not to mention the scars that it could possibly place on your psyche. Yet with a proper plan in place, you will dramatically increase the chances of you and your pooch having a wonderful time together for the duration of his life.