It’s easy to freak out when you see a cut on your dog. After all, blood’s involved, and canine blood has a tendency to make us dog owners nervous. When we find the cut, we may be inclined to reach for Neosporin to help speed the healing process. Should we?

If you own a dog, just know that minor cuts and scrapes are inevitable, just like they are with humans. Even if you have a couch potato breed that doesn’t like to go outside much, he will find a way to pick up a scrape here and there. Accepting this will make dealing with your pooch’s cuts a little easier for you.

There are all kinds of ways that dogs will pick up a minor cut, from scraping against a rock or a thorny bush while in the midst of an outdoor romp to accidentally stepping on a sharp object in the home. Most of the time, these lacerations will occur on the legs and paws. If you spot canine blood, those are the first places you should check.

When you do find a minor cut on your pooch, it is perfectly acceptable to use a human ointment like Neosporin. It works because the ointment itself is designed to kill sensitive bacteria that festers in a wound so that the healing process can be accelerated. The substance doesn’t care if the bacteria originates from human or canine flesh.

As is the case with any over-the-counter aids for various maladies, there are limitations to Neosporin’s usage that you should be made aware of prior to deploying the ointment on your pooch. Most of these limitations are primarily driven by common sense, such as wound size and depth. Generally speaking, if the wound looks gnarly, see a vet.

What to do Before You Apply Neosporin

Putting Neosporin on your dog isn’t simply a matter of grabbing the tube, squeezing, and slathering the stuff on the affected area. There are a few essential steps you should be doing before you reach this important phase of the healing process. These steps are designed to make sure the healing process happens properly and efficiently.

The first step you should take may not even involve a cut. When your dog settles down after a vigorous playtime session – especially if the session is outdoors – take a look at his body to make sure he didn’t pick up any cuts or scrapes. Even minor wounds could become festering havens of gunk if not attended to in a timely manner.

If you do see blood, seek out the source of the wound. Remember, minor scrapes are most likely going to be along the legs or on the paws, so start there first. As you check, remember to stay calm – you won’t be doing your pooch any favors by freaking out.

When the source of the cut is located, it’s important that you clean the wound first. Rinsing the wound with water will help flush out any accumulative dirt that might be hanging out in the scrape. You can also use something more heavy duty yet gentle like iodine if you have it handy.

If you’re dealing with a particularly furry breed that has a ton of hair encircling the scrape, you may want gently trim the area around the wound with clippers. Doing this will obviously allow you to see the would easier. It will also help speed the healing process, as you won’t have to worry about hair and what it may pick up falling over the wound.

One other important thing to bear in mind: your dog will not like what you’re doing to him. Remember, you’re working on an area that, when touched, will cause him pain. Even if you own the sweetest doggie in the world, he may react to this discomfort by biting you as a natural means of self-defense.

As such, you may want to consider putting a muzzle on your dog for the whole cut-tending process, from the washing of the wound to the application of Neosporin. Even if you have a toy breed or a small dog, an aggressive, protective bite may cause bruising or could even puncture the skin. It’s better to be safe than sorry.

Managing the Wound Once It’s Found 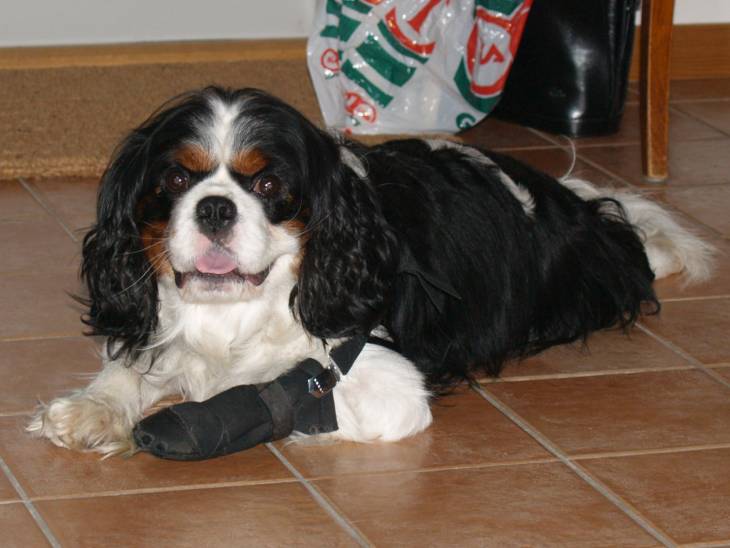 If you’re dealing with a minor cut, you can expect to apply Neosporin two to three times per day, until the wound is fully healed. However, Neosporin is not necessarily leave you in an “apply it and forget it” situation. It’s wise to monitor your pooch’s behavior during the healing process.

Your dog will most likely attempt to lick his wounds. This is a natural occurrence that dates back to the animal’s ancestral roots, as it’s been shown that a pooch’s saliva does contain minor antibacterial healing powers. Yet unlike wild dogs who had to be on the move for survival, domesticated dogs have the luxury to sit and lick to their heart’s content.

This licking could easily turn into an obsession if left unchecked. This is a bad thing because if a dog licks a spot too much, the natural healing powers dissipate and it could make the cut even worse. What’s more, if you’re applying Neosporin to the cut, he may end up constantly ingesting it, which is not a good thing.

There are a few things you can do to help your pooch refrain from developing a licking habit. You could use an Elizabethan collar, or you could use something less obtrusive like a sock or a bandage. You can also lean on basic training commands to let him know his behavior is frowned upon.

The most important things you can do for your dog when you apply Neosporin to a cut don’t necessarily have to do with the actual substance. However, it’s vital that you follow through with all of these steps in the event of a minor cut. Your dog may put up a fuss, but he’ll be better off in the long run.